COST Training School on Symmetric Cryptography and Blockchain was held in Torremolinos, Spain during February 19-23, 2018.

The training school was co-organised with the COST action IC1306 “Cryptography for Secure Digital Interaction” and contained lectures on symmetric cryptography as well as lectures and discussions on blockchain technologies.

One of the focuses of the school was on modes of operation and authenticated encryption. Many applications require to guarantee both confidentiality and integrity of the data. A standard algorithm for symmetric encryption consists in using a block cipher, typically the AES, together with a mode of operation (e.g. CBC or CTR) which enables to handle variable-length messages. There is no such solution for authenticated encryption which is satisfactory both in terms of performance and security. Therefore, the on-going Caesar competition has been launched in 2014 in order to design and analyze new authenticated encryption schemes suitable for widespread adoption.

One of the hot topics in cryptology at the moment is blockchain. Bitcoin is the first example of a blockchain and it has spawned a lot of attention. A block chain is constructed using a cryptographic hash function. Cryptologists do not seem to agree on the impact and importance of the blockchain technology. Thus, there was a session in the school with different views on the topic.

The school was suitable for Master students with a background in cryptography and security; PhD students and security experts from industry. 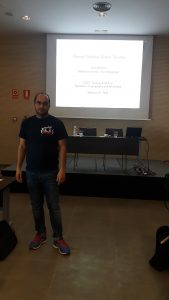