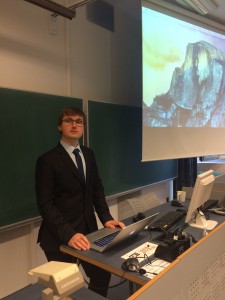 Another COINS student, Oleksandr Kazymyrov, has graduated having defended his doctoral thesis on «Methods and Tools for Analysis of Symmetric Cryptographic Primitives». The defence took place at University of Bergen on the 1st of December, 2014. Six weeks before that, Oleksandr performed a trial defence at the COINS Ph.D. student seminar in Tromsø.

There are many services nowadays that require secure transmission of large amounts of data. For that purpose special algorithms for symmetric cryptography are used. Such types of cryptographic primitives were scrutinized in the thesis. The focus of the research was on block ciphers, stream ciphers, hash functions and the components they are built of. The thesis proposes several methods to assess the reliability of cryptographic algorithms against a variety of modern attacks. It also proposes several criteria to improve resistance ratio. A piece of software was developed as a proof of 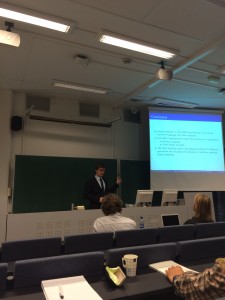 concept of the theoretically achieved results. The block cipher and the hash function developed in the research will be implemented in the Ukrainian natioal standards from 2015.