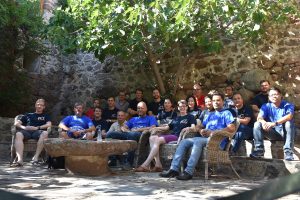 The fourth COINS summer school was held successfully at the Metochi Study Centre on the Greek island of Lesvos, operated by University of Agder, one of the consortium members of COINS.

The topic of the summer school was network security.

Six invited lecturers, thirteen students from COINS and abroad, an international researcher, supervisors and an industry representative contributed to the programme. The topics of the lectures were:

This entry was posted in News, Past events. Bookmark the permalink.