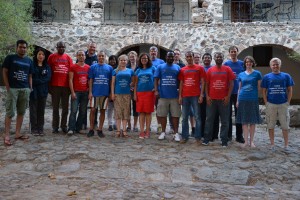 The first COINS summer school on cloud security is over. It was held successfully at the Metochi Study Centre on the Greek island of Lesvos, operated by University of Agder, one of the consortium members of COINS.

The topic of the summer school – cloud security – was chosen by poll among COINS students. The programme committee consisted of Ijlal Loutfi, Patrick Bours, and Hanno Langweg.

Six invited lecturers, twelve students, and two supervisors contributed to the programme. The topics of the lectures were:

Most of the participants had used the opportunity to pay a visit to ENISA in Athens on the way to the summer school on the island.

Date and topic for the COINS summer school in 2016 will be determined early next year.

A bold idea is to have a COINS student defend his or her thesis during the summer school next year.

This entry was posted in News, Past events. Bookmark the permalink.