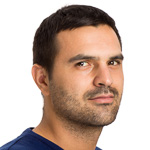 Ph.D. started in: 2017
Expected year of graduation: 2021
COINS consortium member: Norwegian University of Science and Technology
Supervised by: Colin Boyd
Research area: Cryptography
Project title: Securing emerging network technologies with homomorphic encryption
Project description: The main objective of the project is how to profit from new technologies without sacrificing security. The main idea of the research project will be to design methods which will secure processing of the data in these technologies by using different homomorphic encryption protocols. What is expected as output is that the methods which are going to be designed, implemented and then deployed in these technologies can be later applied to a wide range of ICT applications area in the near future.At the first part of the project the focus will be more in cryptography itself.
As a Ph.D candidate I have a plan how to achieve the main objective. Firstly I am going to read papers and others work about the homomorphic protocols and their practical use in the area of networking technologies such as network function virtualization (NFV), software defined networks (SDN) and in cloud computing. At some later stage an analysis of the suitable current homomorphic protocols applied in networking technologies will be done. At present there are many candidates for the most useful virtual network functions, including firewalls, filtering and classification. In this stage will be important to keep the processing as simple as possible in order to be able to accommodate the available homomorphic schemes. In this phase will be considered what are the fundamental logical building blocks which can be combined to perform useful network functions.
In some later stage an investigation of practical homomorphic encryption algorithms will be done. At this moment inside cryptography community a lot of effort is in progress in order to achieve more practical version of Gentry’s fully homomorphic scheme. One interesting approach is to use the idea of CryptDB to focus on processing based on logical building blocks.

At the second part or the project the focus will be more in networking side.
One idea is to do experimental implementations. To be able to do experimental implementations the first part of the project is essential to be accomplished. At the early stage of the part two, the first thing to do is to implement the protocols we have designed by the first part. Then after the designed protocols are implemented and optimized a possible thing to do is to deploy them into some networking technologies in order to do some experimental measurements and validation of the protocol performance with proven security. A collaboration with existing research partners at the Department of Telematics, particularly Telenor, will be of major benefit at this stage.

Courses attended:
Events attended with COINS funding:
Get signed cerificate
This entry was posted in Students and tagged NTNU. Bookmark the permalink.